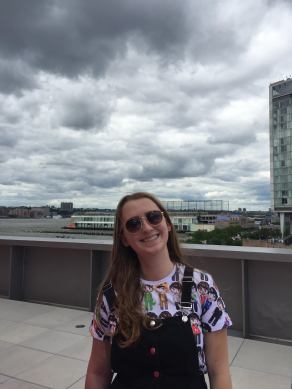 Girls Who Code alumna Caitlin Stanton is making waves in the world of tech. Founded by Reshma Saujani, Girls Who Code is a summer program that provides teenage girls with programming lessons and immersions at various big-name tech companies. Upon joining Girls Who Code, Caitlin has become an advocate for women in tech, participated in multiple hackathons, co-founded two hackathons, and won several accolades from Mozilla and Huffington Post.

Looking back on her journey in tech, Caitlin is grateful for having been raised in such a supportive environment.

“I’ve been fortunate enough to have grown up in an environment that never tried to stifle my interest in tech. In fact, it was my parents who encouraged me to apply for the Girls Who Code program, even though I emphasized how little I wanted to be a part of it (and look where I am now!),” she shared.

Caitlin added that “maybe being a woman interested in STEM made my friends and family more enthusiastic about the field itself…” But aside from having a stellar support system, she also has an excellent role model–Mayim Bialik.

“Mayim Bialik is an inspiration to me, mainly because she seems to tackle a bunch of aspects of life without skipping a beat. She’s a mother, yet also has a Ph.D. in neuroscience. She’s an actress, but also is able to stick to her principles as an Orthodox Jew. She’s written a book and spoken up about controversial issues like feminism. She’s a woman who isn’t afraid to follow her dreams and speak her mind, and that’s powerful,” said Caitlin, who also believes that it’s important to increase diversity in the field of tech.

She said, “As a straight white woman, I have no idea about the experiences of a queer black woman or a transgender Latino man, but that doesn’t mean these people are less qualified or deserving to have products and services targeted to their wants and needs…Outside of my personal development in the field of tech, being a woman has made me more conscious of how I am privileged, no matter how insecure I may feel about myself and my abilities. Due to this, I’ve founded hackathons and taken executive roles in the organization that helps promote diversity and equality in the field of technology.”

Currently, Caitlin is a sophomore at Cornell University pursuing a degree in Electrical and Computer Engineering. Having gone from a Girls Who Code participant to hackathon organizer, this young woman in STEM has some advice for girls who are hesitant, but interested, in STEM:

“Just go for it. Honestly, just go out and do it. The sad fact about women who are interested in STEM is that they lose confidence in themselves and their abilities in their adolescent years, whereas boys their age remain steadfast in their belief that they are capable of success in STEM. If you’re a girl who’s interested in STEM, it might seem difficult to keep on when you feel insecure or others around you have doubts about what you can do. What I did to combat these feelings was find myself a network of girls who felt the same way, so we could all learn and grow and share with each other, providing us all with a supportive group of friends to fall back on no matter what. When you have people around you encouraging you, it’s so much easier to pursue a dream than if you’re by yourself and constantly questioning yourself. Once you find those people, apply yourself–enroll in programs like Girls Who Code or AP Computer Science, attend hackathons with your friends, research developments in STEM made by females, code a side project–and whenever you feel insecure or uncomfortable, which happens to *everyone*, talk about it with the friends and family who believe in you and what you can do.“

The author, Audrey Pe, is an incoming high school junior from the Philippines. Passionate about startups, programming, and women empowerment, Audrey advocates for more women in tech through this blog. She wishes for people to read her interviews with women in tech, be inspired to pursue careers in the said field, and support women in tech everywhere.